Anyone Can Write Erotica

No, that isn't some sort of tagline to get you to read this article. It really is true. Anyone can write erotica. It isn't as hard as you might think. But how do you go about writing erotica? Don't you need some sort of training? Maybe, but even that is simple. You can train yourself.

When I first started, I didn't have a clue how to write erotica. In fact, you can see it yourself by reading some of my first books. I was terrible, but I started to learn what worked and what didn't work by constantly writing and publishing new books.

I envisioned myself being in a room with a blind person in a wheelchair. If I was able to describe everything that was happening in such a manner that let them feel as if they were in the sex scenes, then they would pay me $1M.

A good story has a main character who wants/needs something. They meet the person who is going to give it to them. The tension you build to the point where the actual act takes place is what keeps the reader engaged. They are so desperate to see the outcome of the situation that they keep reading.

Now short erotica is not going to get you a Pulitzer Prize, but that doesn't mean it should suck. A story about a pizza guy who gets blown because the girl doesn't have any cash isn't going to sell much. There has to be a purpose for the sex.

Maybe a guy is lured by the sight of a sexy woman who is half his age. What he doesn't know is that she has a fantasy about fucking older men. Building the tension to the point where he finally discovers her secret is what makes the reader want to see them fuck.

Want to learn more about publishing erotica? Head on over to amazon and check out my book: 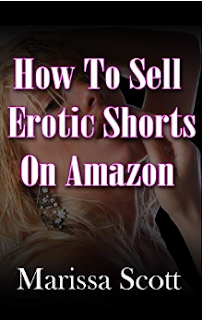 The bonus is that if you have kindle unlimited, it's free to read!

Posted by Marissa Scott at 7:15 AM